Rising Belgian talent Melawati has been making waves in the scene through his array of modified machines and modular synths. We caught up with him to discuss his upcoming debut LP ‘Artimia’ on Ellum Audio and the production process behind it. 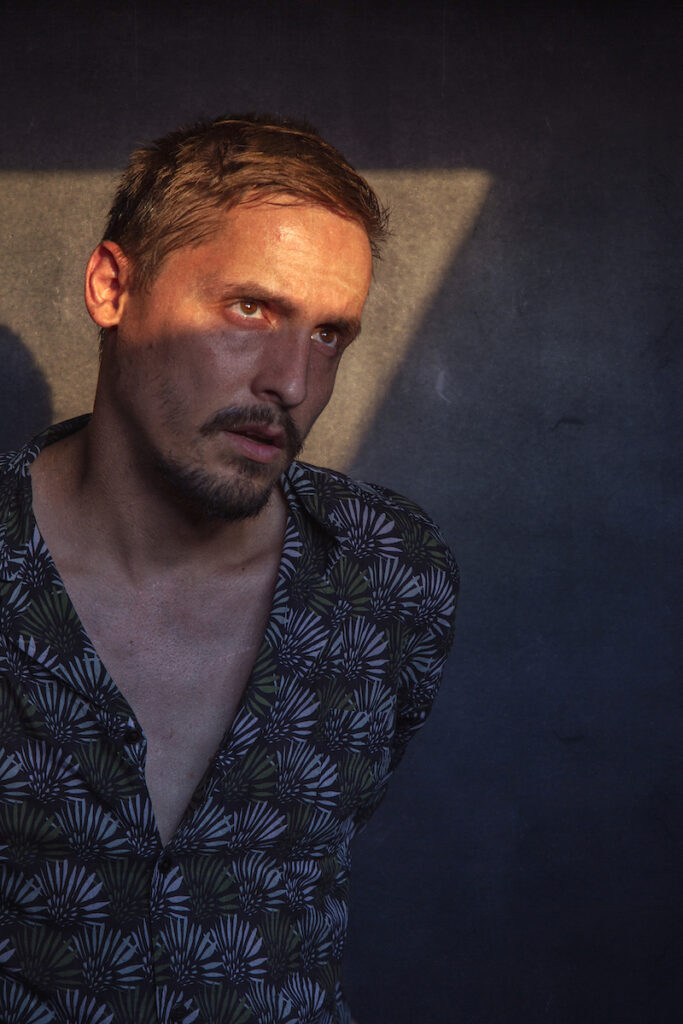 Hi and welcome to Minimal Mag. How are you and how has 2022 been so far?

I am great. 2022 has been filled with shows and long nights in the studio, which is how I like it. I have not had enough sleep, but more than enough adrenaline to make up for it. Coffee also helps.

What’s the story behind the name Melawati?

If I find out I’ll let you know. I went traveling a long time ago, and with no strings attached, there was a bit of partying involved. After a particularly hazy night in Kyushu, Japan, I woke up with the word Melawati written on my arm. I never really found out why I, or somebody else, had written it down though. I am guessing it was something I had to remember, maybe a place or somebody’s name. But it’s a blur still. I took a picture and always remembered the name, but never found out the meaning. However, since my music is an ode to meaninglessness, it made perfect sense to finally use this word I memorized so many years ago. One day I’ll run into the person or the place it referred to and all will make sense again.

Your music is very experimental, where has your inspiration been drawn from?

There’s a lot of inspiration coming from the machines I use to make music. I use modular synthesizers, which lend themselves quite well to experimentation. I try to make sounds before I make songs, and a lot of the experimental side of my tracks stems from this sound design phase, but when I do hear something that gets me going on a track, I will try to first build a vibe from textures and harmony, and only then move on to writing. So when I start recording, I have no idea what the song is going to be, which makes the process feel loose and free, and like one big playground. The whole time, though, I’ll often have an image in my head, pretty visual or spatial, from an old movie or a book I read. I will try to see it clearly, and somehow build my track to fit the image. So it’s mostly movies, books and places. There’s not a lot of other music going round my head when I’m working on stuff. I have friends and other producers that load up a project with reference tracks, or dig up old vinyl to listen to while working on their own stuff, but that really doesn’t work for me. Listening to music and making music seems to occupy very different parts of my brain. I don’t know if I should count that as a positive or a negative, but it holds true most of the time.

You seem to lean towards being more of a composer than the average dance music producer. Can you tell us about your musical background?

My father played in a Beatles cover band, so I grew up on fab four sounds. Naturally, I leaned towards indie bands, drumming in most, writing bad songs and singing them terribly. Later I joined The Subs, playing live drums over big dance tracks, playing festivals and clubs all over. The energy was overwhelming, and it was hard to go back to the more quiet indie stages. I started to make tracks of my own, using synths and drum machines instead of guitars and bugles. Looking for melody and energy, and finding it in my experiments with modular and diy nonsense.

Your debut album titled Artimia is set for release in October on Ellum. How have you found the process of producing an album?

It has been quite a trip. With a lot of highs, and a lot of lows. A couple of years ago, I had a problem with my heart. I had pretty bad arrhythmia (I did not like this spelling, so I changed it for the album), and as a result my heart would just stop, quite unexpectedly, for a couple of seconds, and restart again. It was a good half year before it got more or less resolved, and in that year I started making music, to distract myself. Spending your days worrying whether your heart will start again, after it skips a beat, really stresses you out, sends your brain into panic mode, and puts you in a very bizarre mood. You become hyper aware of everything and over time, it really starts to get inside your head.

As an antidote to this, I really wanted to focus on very intuitive, and maybe even primal jams, not planning anything out or wondering about where the track was going. Just staying in the present, and feeling out the music as I was making it. I needed the bliss of not overthinking the moment and for the beat to keep going. It was therapeutic and a way to practice my skills of letting go. The jams were eclectic and raw, but for a long time, I couldn’t really listen to them, as they brought me back to that weird place.

Weirdly, when the pandemic hit, I saw the rest of the world scooch closer and closer to that same head space, where there was lots of stress, lots of overthinking and denial. All of the sudden the music I had made before, no longer reminded me of the problems I was facing at the time, but the solution they offered getting through it. They made me feel better. Not knowing what was going to happen, and being okay with that, was something I had learned the hard way, but now knew how to do. I was already in contact with Ellum at this time, and had done Daliah with them. We were sort of aiming to go for an album, but all of the sudden there was time, and purpose. And so, locked down in my apartment in Brussels, as the world skipped a beat, I turned those early jams into an album…

Do you have a routine you adhere to when in the studio?

There are some small things. I try to get a visual idea going in parallel to a track I’m making. Something that fits, something that helps to build the vibe. I’ll have this image on a small TV in the studio while I’m making the track. To keep myself in the same headspace. I had a projector at one point and would project it onto the walls or ceiling, bathing the studio in whatever color scheme I picked. I also end all recording days with 20-30 minutes of idle piano playing, recording everything I play. Somehow, when I’m done thinking for the day, a lot of fresh ideas pour out unfiltered by me thinking of what the next track should sound like. These snippets go into a special folder, and have given me some of the best musical starting points.

You have been releasing with Ellum Audio since 2020. What is it that has connected you with the label?

A couple of years ago, 2019 it might still have been, I kept an online diary of my experiments with modular synths and DIY stuff, posting small videos of my jams on insta, and called it a day. I didn’t really care about making tracks or anything, I was just messing around. There was something there, but nothing got finished. Until, very out of the blue, while I was hiking a mountain, I  got a message from Maceo Plex, asking me about a jam I did, and asking if he could release it. I texted back, foolishly, saying that it wasn’t a track really, just something I was playing around with. He has better ears than I have, tough, and he just texted back: Please make it a track then. Can I have it by friday?

And so, I went to work. A couple of weeks later, Daliah was being played the world over. We’ve kept in touch ever since, orbiting Ellum, and planning an album.

Your live performances are quite a spectacle. Is your love for theater, combined with your history of playing in bands the catalyst for these shows?

The lead singer of The Subs once explained it beautifully to me. As a performer on stage you can either inhale energy. Take attention, have everybody go quiet, be laser focused and have all eyes on you. Or you can exhale energy, send it from you into the crowd, make them be loud, fire them up, have them dance with the person next to them and blow the roof off. Some go about it one way, The Subs chose the latter, and I try to go back and forth. I go deep into musical passages, ride the music for a bit, but then switch gears, face the crowd again, join in and dance with the room.

Modular synths are a key component in your productions. Where did your fascination with these begin?

I was making a documentary about analog synths, and had to film some sequences in a room with an old Roland system100 setup. They left me unattended for a bit to long and I started fiddling with the machine, making noise, building patches. I was sold. I went home and looked up the price of a system 100 and then I looked up what would be a good alternative, and found eurorack. I started with some basic stuff, but got more and more into it over time. It’s just really fascinating stuff. You build a sound from scratch, from voltages and pulses. Since there is no real-life sound source your head associates with these kinds of sounds, you can trick the mind a bit. You can make stringlike sounds that morph into plucky percussion, that turns into watery rhythms and so on. Ears are extremely fast at deciphering information, just think about how fast you react when you hear your name in a conversation one table over, but using sounds that don’t exist, will make that analytic part of your brain flip out a bit. This creates tension, but also does something else. It forces your mind to surrender a bit more to the sound on a more intuitive level. You feel a bit submerged in the sound. All this leads to a nice balance of chaos and order, melodies and randomness, soothing sounds and weird noises. It’s a sweet spot I like very much.

Are there any more releases in the pipeline?

I will do more remixes, and more remixes will be done of my tracks, as is often the case, but I will take my time to digest this album and go and play it live. As I often rework my stuff while I’m playing it on stage, there will be different versions emerging, and new ideas spawning.

Where can our readers expect to see you throughout the rest of the year?

There are a lot of dates popping up in my calendar, some in clubs, some in more outlandish places. Too many to name, but they will be revealed in time on the usual channels.